8-night Treasures of Ireland and the British Archipelagos Cruise

At the southern end of the Great Glen, this area's main town is Fort William, a major and well-resourced touring and route centre for the West Highlands. The area also takes in the Highland landscapes between Loch Linnhe, the major sea-loch at the south of the Great Glen, and the western seaboard itself. These include the lands of Ardnamurchan, Ardgour, Morvern and Moidart - rugged landscapes notable for their soft and mild Atlantic climate, and - in places - their lush growth of mossy, fern-rich woodlands.

Belfast is popular with travelers who come to discover the city’s physical beauty and renewed tranquility. Enjoy performances at the Grand Opera House, shopping along trendy Donegall Place and visiting numerous pubs along The Golden Mile. St. Anne’s Cathedral, also known as Belfast Cathedral, is the principal church of the Anglican Church of Ireland and contains stones from every county in Ireland. Located next to Europa Hotel, the Grand Opera House boasts an impressive mix of large productions of opera, ballet, musicals and drama. Known as the Big Ben of Belfast, the Albert Memorial Clock Tower was built in 1869 to commemorate the Prince Consort. Built in 1849 as one of Queen Victoria’s colleges, Queens University is one of the foremost universities in the British Isles. The classical-style building of Stormont, erected in 1928-32 to house the Parliament of Northern Ireland, stands 3.5 miles outside the city. The Prince of Wales Avenue is exactly one mile long and is bordered by rose beds containing 600 of the famous Korona roses noted for their scarlet blooms.

Dublin enjoys one of the loveliest natural settings in Europe. Dublin attracts visitors from around the world with its old world charm and friendly atmosphere. Most of the architecture dates from the 18th century, when Dublin enjoyed great prominence and prosperity. Also of interest are stately Georgian houses which front Merrion Square. O'Connell Street is considered the commercial center of Dublin. Perhaps the most memorable feature of Dublin is the traditional pub, where visitors can enjoy conversation over fine Irish brew. The city also offers many fine parks, including St. Stephen's Green and Phoenix Park. National Gallery's renowned collection includes works by such famous masters as Rembrandt and Monet. Trinity College's Old Library is home to the most cherished treasure, the Book of Kells, a manuscript of the Gospels. Admire Christ Church Cathedral and St. Patrick's Cathedral. Enjoy the exhibits in impressive National Museum. Self-guided walking tours include Old City Trail, Georgian Heritage Trail and the Cultural Trail.

Dublin: An Introduction to Dublin - 4 hours

Holyhead is the largest town on the island of Anglesey and a busy ferry port. The town has a number of interesting attractions and is a bustling shopping and visitors area. Around Holyhead there is excellent fishing, golfing and,of course, sailing facilities. Couple this with wonderful scenery, walks and beaches and you can easily lose yourself and relax for a few days. A day trip by ferry to sample the wonderful Dublin is easily achievable.
Anglesey has a number of both historic and prehistoric sites close-by. The maritime museum in Holyhead is well worth a visit with exhibits on 100 or so shipwrecks that have taken place in the vicinity. Stroll' down to South Stack Lighthouse.

"Stop, look and listen" takes on a whole new meaning in Scilly. Relax and take time to discover the islands' flora and fauna and listen to the timeless whisperings of the ocean all around under wide Atlantic skies.
But don't think timeless islands need to be behind the times. All the inhabited island offer excellent, modern accommodation and amenities, safe sandy beaches, pubs and opportunities for outdoor sport. There are many sites of historical interest throughout the islands and the birdwatching and scuba diving are renowned and, most importantly, Scilly is virtually crime-free, making it one of the safest environments in the world.
Spring and autumn are especially good times to visit the islands. Enjoy the peace and the tranquillity of one of the world's most beautiful archipelagos.

Dartmouth is a beautiful seaport on the coast of England in the County of Devon. A reputable center for yachting, the harbor is considered first-class. The town's rich maritime past has been well documented for more than 800 years. There are numerous things to do while in Dartmouth, from exploring museums and castles to golfing on their world class golf course. There is even an amusement park, the Woodlands, which has won many national awards. The Market is the place to shop. Just walking around Dartmouth can provide hours of entertainment. The Butterwalk and Foss Street are places to not miss.

Guernsey is the second largest island and its capital, St. Peter Port, was truly put on the map in 1855 when Victor Hugo was exiled from France and made his home at Hauteville House where he wrote Les Miserables. Renoir also painted a number of his masterpieces here. Today, Guernsey is a wonderfully cosmopolitan destination particularly loved by beach and watersport enthusiasts.

The peaceful setting of the picturesque port of Honfleur along the estuary of the Seine attracted many artists and writers over the years, including Impressionist Painters. Throughout its history, numerous maritime journeys were initiated from Honfleur. It's a place of great historic charm, notably around the Vieux Bassin, where lofty slate-and-timber fronted houses overlook the colorful yacht and fishing harbor, and sloping cobbled streets recall 16th century Honfleur. Not to be missed are the 15th century wooden church and the Impressionist paintings of the Musee Eugene Boudin. From here it is possible to visit Monet's Garden, Arromanches, the Normandy Landing Beaches and if there is time, Paris. 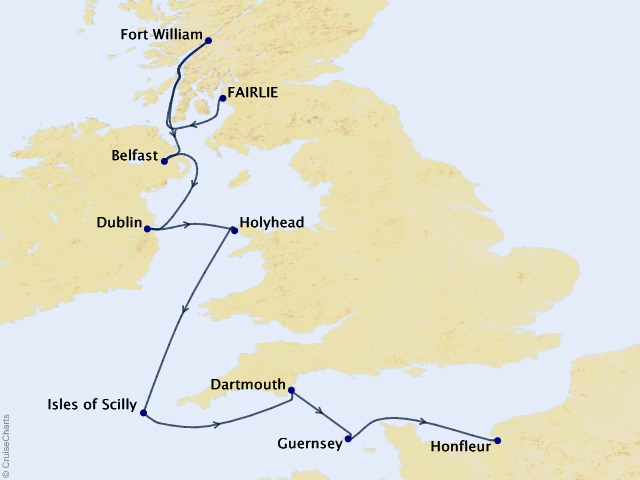 Cruise, meals, and more... including:

Remarks:
Fares listed are per person, based on double occupancy, unless otherwise noted.

All fares are quoted in US Dollars.

All prices per person and in USD unless otherwise stated.
Offer ID:
1464263