Originally a fort built by the U.S. Army in 1838, during the Second Seminole War, Ft. Lauderdale has little left of its warlike past. Instead the city welcomes visitors with broad beaches and an easy pace of life, plus convenient air and water connections that make the city a perfect place to visit.

The Canary Archipelago, or Fortunate Islands, as they are often called, owe their fame and fortune to their geographical location and climate. Of volcanic origin, the islands lie off the African coast and encompass such a variety of features that in the course of a day it is possible to pick bananas, throw snowballs, swim in the Atlantic and climb mountains. Tenerife is the largest of Canaries. The south features a desert with grotesque rock formations and chunks of cooled lava. Further north stretch miles of green fields of bananas, tomatoes and potatoes. Mountain slopes are dotted with beech, eucalyptus and pine trees. The coastline is as varied as the areas inland, offering black, grey and golden sand, cliffs, tame beaches and wild capes. A spectacular example of past volcanic activity is Canadas crater which rings Mount Teide - the main feature of the island. At 12,198 feet, the cone-shaped Teide is the highest Spanish summit and nearly always snow-capped. A cable car is available to the top.

The Balearics are comprised of 16 islands; the three principal ones are Mallorca, Ibiza and Menorca. Lying just 60 miles off the Spanish mainland, the islands’ lush and rugged landscape combined with an extremely mild, sunny climate prove irresistible. The Balearics boast cosmopolitan resorts with lively nightlife and plenty of sports activities. Palma de Majorca is the capital of the archipelago. A cosmopolitan city with sophisticated shops and restaurants, it also offers buildings of spectacular Moorish and gothic architecture. Museo de Mallorca housed in the Palacio Ayamans boasts an interesting collection of Moorish, medieval and 18th- to 19th-century art. Those who wish to explore the northern end of the island will enjoy the dramatic land and seascape of Cabo Formentor at the end of a long, narrow peninsula. A winding road with magnificent views leads to the luxury Hotel Formentor, beautifully situated above the bay. The lighthouse of Cabo Formentor is the most northerly point on Majorca.

Barcelona, the self-confident and progressive capital of Spain, is a tremendous place to be. Though it boasts outstanding Gothic and Art Nouveau buildings, and some great museums – most notably those dedicated to Picasso and Catalan art – it is above all a place where there's enjoyment simply in walking the streets, stopping in at bars and cafés, drinking in the atmosphere. A thriving port and the most prosperous commercial centre in Spain, it has a sophistication and cultural dynamism way ahead of the rest of the country. In part this reflects the city's proximity to France, whose influence is apparent in the elegant boulevards and imaginative cooking. But Barcelona has also evolved an individual and eclectic cultural identity, most perfectly and eccentrically expressed in the architecture of Antoni Gaudí. Scattered as Barcelona's main sights may be, the greatest concentration of interest is around the old town (La Ciutat Vella). These cramped streets above the harbor are easily manageable, and far more enjoyable, on foot. Start, as everyone else does, with the Ramblas.

Barcelona: Walking Tour of the Gothic and Jewish Quarters

Barcelona: Tour of the Gaudi Houses

Marseille is a vibrant, cosmopolitan port in the Provence region of France. Craggy mountains provide a spectacular backdrop. As a Mediterranean melting pot, the port virtually rubs shoulders with intimate, picturesque old harbor, the Vieux Port. Packed with watercrafts, this is the heart of Marseille. Two fortresses guard the harbor: Fort Saint Nicolas and Fort Saint Jean. Several vantage points offer spectacular views, including the impressive Basilica Notre Dame de la Garde - a prominent landmark overlooking the city that is crowned by a monumental, gilded statue of Virgin Mary. Marseille boasts numerous fine museums well worth a visit. Sitting at one of the many outside cafes or strolling the streets of the old port area lets you experience the unpretentious charm of this city. Other sights include Chateau d'If - a 16th century fortress-turned-prison; Basilica St-Victor - Marseille's oldest church with the appearance of a fortress; and La Canebiere - a broad boulevard with everything from hotels to cafes and shops.

Located in the northern region of Italy, La Spezia is one of Italy's biggest military and commerical harbors. Cinque Terre and Portovenere are often accessed by La Spezia.

Civitavecchia is the port city for Rome. Rome has always been and remains the Eternal City. With its splendid churches, ancient monuments and palaces, spacious parks, tree-lined boulevards, fountains, outdoor cafés and elegant shops, Rome is one of the world’s most attractive cities. Among the most famous monuments is the Colosseum where spectators watched combats between muscled gladiators and ferocious animals. Stop to see the remains of the Forum, once a political and commercial center. Rome’s squares were enhanced with such imposing structures as the Vittorio Emanuele Monument and grandiose fountains like the Fontana di Trevi. Awe at Christendom’s most magnificent church, the Sistine Chapel. The busy square Piazza Venezia is easily recognized by its imposing Vittorio Emanuele II Monument. Take a stroll to Rome's famous Trevi Fountain. Vatican City is the site of lovely St. Peter's Square and St. Peter's Basilica, where for 200 years, Renaissance masters worked on its design and created an unparalleled masterpiece. Visit Vatican Museum.

Rome and the Vatican City: 8-9 hours 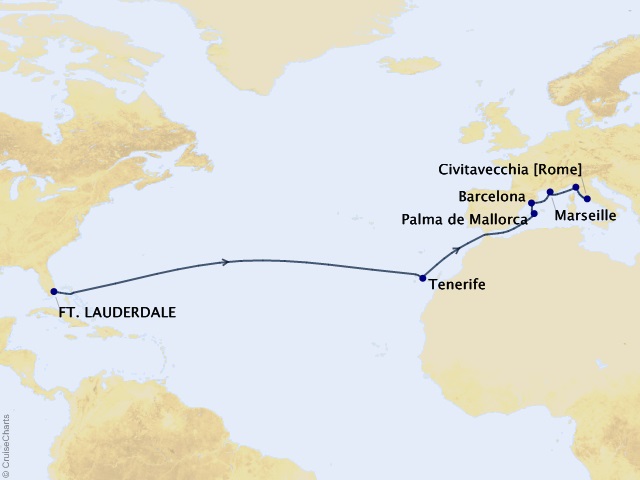 Rates are cruise only, per person, based on double occupancy. Taxes, Fees and Port Expenses of $138.45 additional for all guests. Rates are subject to availability and may change without notice. Restrictions may apply.

Departure Date:
4/18/2021
Number of Nights
15
Cruise Inclusions:
Available Addons:
Optional roundtrip airfare from your city
Optional shore excursions
Remarks:
Prices are per person, based on double occupancy. Airfare, Taxes, Fees and Port Expenses are additional for all guests. Pricing for 3rd and 4th guests are available upon request and are subject to stateroom category availability. Prices change frequently

All prices per person and in USD unless otherwise stated.
Offer ID:
1370403